The egg arrived in the nick of time on the Friday, we’d arranged to meet up after work by Oxford Circus Tube. 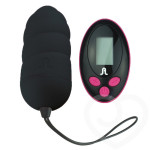 It took me a while to insert the batteries, I had to call the Love Honey help line in the end and admit that Id been defeated by the rather crap instructions that came with the very extravagant toy.  After 5mins of instruction from the girl who sounded rather young on the other end, RESULT!!  The toy was up and running.  Of course keen to try out the range I placed the end on a hard surface (so I could hear it vibrate) and walked into the next door room. Pressed the button buzzzzzzzzzz… Well that certainly works, it actually bounced off the surface and onto the floor…  I took out the batteries again, didn’t want it going off in my jacket pocket on the tube, placed it in the little which satin bag is comes with and left for the station.

I arrive at Oxford Circus Tube, text Laura to say where I am and do a bit of Tinder Swiping to pass the time, left, left, left….. OMG minger, left….

Then all of a sudden “James?” a rather tall, smartly dressed, red head appears right in front of me, Christ I hope she didn’t see me Tindering….

We do the usual two cheek salute and then wander into Soho for a place to have a drink.  We walk passed Casa on Wardour Street and decide to head in for a couple of cocktails.  Quite a small venue where you sit quite close to the main bar, not too much privacy, but we got talking about a recent case of hers at work.  She was obviously a smart women, appeared in court a lot for legal disputes that she was representing being a solicitor.

Laura seemed very straight laced, very corporate, I guess needed to just relax after a long working day.  A few Gin cocktails should set the mood I thought so we ordered and waited.  A few moments later two rather strong martini type cocktails appeared and we sipped away.  I mentioned that I had the toy in my jacket, pulled it out slightly for her to see but as there really wasn’t much privacy I kept it under wraps.

I was being quite tactile with her that night, maybe helped by the bloody strong cocktails hitting my system and having not had any dinner.  At one point I had my hand on her shoulder and she very abruptly said ” you really need to stop doing that..” Ok hmm I thought is this game over already before the night had got under way?  I apologised and she replied “No its ok, it was just really annoying me and I though I should just say”. Well maybe she just speaks her mind, I thought, well lets not dwell on it and I continued the conversation.

After another Gin style cocktail I suggested we moved on to another venue.   Walking out of Casa I suggested we try Dean St. Town House, Id been before, the Cocktails amazing and the ambience quite dark inside perfect for a relaxed drink.

Walking into the venue a long bar stretches into the distance, lined with seats that you can sit at without booking.  We perched on two of them on the corner of the bar, taking over from a couple of very drunk Banker types.  Exploring that very comprehensive cocktail menu we order our first drinks. I had a Manhattan, a staple favourite of mine and always a good test of a good bar to check their selection of Bourbon.

The mood was very relaxed in the restaurant, bustling but not too loud, a very mixed clientèle from older guys with much younger stunning ladies to groups of co-workers having a Friday post week get together.  I was starting to enjoy the evening with Laura, the conversation flowing well, I managed to steer her away from talking about work and obviously the drinks were helping to relax us both.

I reminded her about the Vibrating Egg pulling it out of my jacket pocket and suggested that she popped to the toilet to do the deed.  Problem was Id taken out the batteries and then had to work out how to be Houdini to then insert them in the bar without anyone seeing.  Luckily the lights were dimmed quite low and the egg part was all black, so under my jacket I managed to slip the batteries in and tighten it up.  I kept the remote and handed her the egg with a big grin on my face.  “Well off you go then” I said tongue in cheek.  She smiled back, took the toy and went to find the toilets.

After ten minutes or so she returned, I did wonder what she’d been doing… “everything ok?” I asked.. “Yes” she replied, “its just a big bigger than I thought”. Well then let the fun begin. I let her sit down before I took the remote out of my pocket and held it discreetly in my hand.  I waited until she took her cocktail in her hand and had a sip, pressing the button the toy suddenly launched into life.  Taken by surprise Laura almost spits out her cocktail but turns to me with a huge grin on her face.  “It’s working then?” I chuckle…

For the next hour we carried on enjoying a few cocktails, and we swapped being in control of the remote cycling through the various ten functions to find the best one that she enjoyed.  She was clearly getting pretty frisky by this point, we were kissing frequently and I think her mind was beginning to think a lot more about other things.  I hadn’t really planned on going back to hers that night but she offered to continue having a drink at hers so we jumped into a cab.

The cab journey took us about 20mins during which time I think the cab driver saw a lot more of Laura’s legs in the air than he had anticipated when he picked us up.  The toy had certainly set the mood for a lot more sexy antics that night.  It was certainly a winner, and once back in Laura’s rather plush city pad we continued with another drink and retired to her room to carry on what we’d started in the cab earlier… However this time without the Egg….

The Vibrating Egg Date
The Birthday Blow Out

One Response to The Vibrating Egg Date Part 2