I met “L” at Brixton Tube (the staple meeting place for a date) having messaged a while on Tinder.  It was a glorious summers day, Brixton was heaving.  I didn’t really know Brixton at all so she suggested a bar close by around the corning, the Craft Beer Company.  I had no idea where this date would lead. 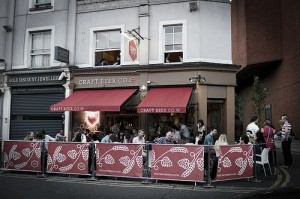 “L” was wearing a flowing summer dress, a tall lady, was a nice change to date someone closer to my height.  Would make kissing a hell of a lot easier I though to myself….

It was right next to the market so as we sat outside sipping on our cool ciders we watched the traders on their food stalls.  They were selling a huge variety of Afro-Caribbean food, making me feel hungry at this point.

As the sun went down over the railway arches we decided to move onto another pub where we could sit inside.  One of her locals the Duke of Edinburgh (Not the person the pub).  Finding a table by the window we grabbed our next round of drinks and carried on chatting.  We were getting on pretty well, usual small talk about holidays and family.  Kisses ensued and as it got later in the night we decided to walk back to hers to sit in the garden at her house.  She shared with friends but they were all away for the weekend so the idea of going back for a few more drinks didn’t seem too daunting. 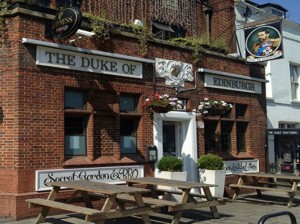 Stopping at the off license to pick up some booze, we wandered back to her house, grabbed her laptop for some music and sat outside.  We were both pretty tipsy by this point having sunk somewhere around 4-5 pints and hands started to wander.  Never thought with this English weather that I’d be having naughty time al-fresco.  I couldn’t help thinking though at any second some of her housemates would burst into the house finding us in a compromising position.

It soon got too cold to sit outside so we went upstairs to her room.  It was pretty vast, an old Victorian house and she had the main bedroom.  As I slumped onto the bed I looked up to the ceiling.  Erm…. “L” what’s that on the ceiling? Is that Spaghetti?  How the hell did that get there?  I could maybe understand that in the kitchen (although still a bit odd there) but the bedroom?  What weird food fuelled antics had been going on in here?

After a round of hide the sausage we both fell asleep.  I woke up to find her making coffee, awesome caffeine hit was definitely needed.  While she was taking a shower I checked my phone, had a few updates, Tinder among them, cleared them down and sat sipping my coffee replaying in my head the antics from the night before.

Finishing my coffee I gathered my clothes from various corners of the bedroom, thanked her for a great night and headed out into the sun towards the tube.  All was good I thought…. Until…..

A few hours later I got a barrage of texts including.

I cant believe you were Tindering after spending the night with me.

My reply was simple

I had alerts so I was clearing them down, its just habit I guess?

The rants continued and I didn’t seem to be able to say anything to calm her down.  After a while I had to bring things to an end and ask her to stop the texting barrage.  A shame as the night went really well.

Lesson learned, don’t look at your Tinder alerts while with or shortly after a date, some ladies actually check….  Although that does seem a little spooky.

Have you ever had a surprising result after a date? Or even found food in strange places.  Let me know by leaving me a comment below.

James Does Date In A Dash @ Cafe 1001 Shoreditch
Reflection