London has no shortage of choice when it comes to dating events.  Fantastic venues and creative ways to meet your next partner.  Before the internet, speed dating was one of very few options singletons had to meet people outside of their friend’s network.

I’d tried speed dating before, many years ago and found it rather painful.  A room full of eager singles that you may or may not fancy but you still have to date everyone despite knowing you are not attracted to them.  How was Dating in a Dash going to be different?  I was about to find out…

This particular event was an activity based event.  I hadn’t really got a clue what to expect but dressed smart, polished my shoes (yep went all out) and headed down with an open mind.

Arriving at the side street Brick Lane venue I was greeted by the hosts and given a score card and name badge.  Almost instantly stuck the pin in my finger…

On the card were some question tips and some do’s and don’ts.  One tip being “don’t lie on your date”.  Ok so that’s me being a millionaire banker out the window….

In the very warehouse type room were board games set up on what appeared to be park benches.  Each bench forming a playground for a date.  Some of the games I hadn’t seen since my childhood including Play-Doh and Twister.  What immediately became apparent was that I was quite looking forward to playing the games, my inner child just waiting to come out. 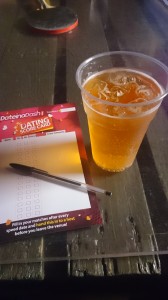 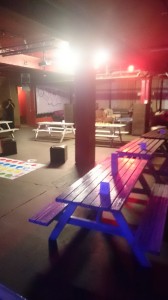 The rest of the dating crowd were scattered around the room, on one side the guys, the other the ladies.  Reminded me a little of a school dance.  I took a deep breath and sat right in the middle of the female group and started a conversation with a lady drinking what appeared to be the largest cosmopolitan cocktail I’d ever seen.  Most appeared to be newcomers to speed dating, I asked if they’d come prepared with any questions but mostly they hadn’t.

Our conversation around lack of preparation was interrupted by one of the hosts who gave instructions via microphone and the night began.  On the table with my first date was the “Don’t Break the Ice” toy.  You had to hammer blocks out without the whole platform collapsing and the man falling to the table.  I was instantly addicted.  Oh wait I’m meant to be talking to the lady sat opposite me.  The games actually proved to be more of a distraction rather than a conversation starter.  Could you really get to know the other person while trying to work out the game in front of you?  This actually became more of a challenge than I thought or maybe it was my male inability to do two things at once.  Have you ever tried having a meaningful conversation with your girlfriend while playing computer game?

So I changed tack on the following dates, had to remember to keep the conversation going rather than playing the games. Play-Doh became the favourite of the night.  After dating had finished everyone gathered around the Play-Doh table to form a modelling session that ended up as a beach scene complete with trees and the oddest animals you’d ever laid eyes on.

We handed in our score cards where we ticked yes, no or possible friend.  These were to be fed into the Date In A Dash system where we would be notified online about any possible matches.  I found this a little frustrating as I’m used to just swapping numbers with someone I like, it seems a lot more simple that way.

I had 3 or 4 matches from that night, one of whom did respond to a message on the system, the others didn’t appear to check, that’s through any fault of the event though but more likely due to the gap in between and people getting on with their busy lives in the smoke.

All in all I had a fun night, I’m not sure if speed dating is my chosen style of dating as I prefer to play the longer game talking to people I do have chemistry with and developing a conversation, along with attraction.

If you’d like to try something new, an imaginative slant on dating events then take a look at their website @ dateinadash.com and get booked in, you will have a great time.

Have you been speed dating? Tell me about it in a comment below.

Sorry its been a while…
The Spaghetti Ceiling Date Brixton